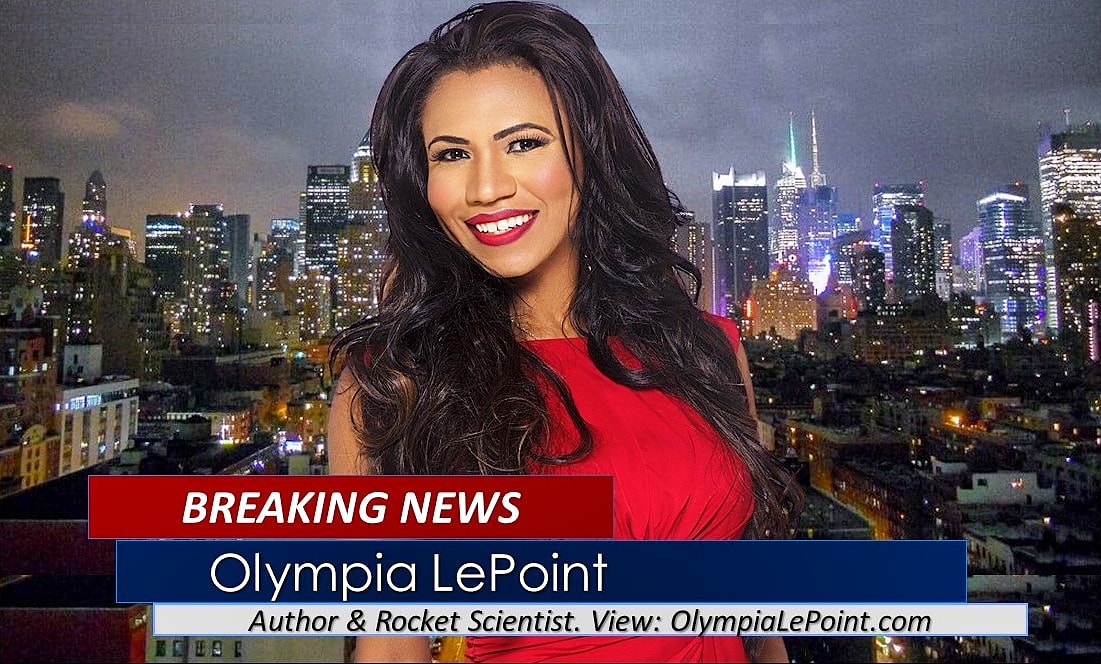 Learn about how science impacts our daily lives and how it can bring innovation.
WATCH NOW
The more you know about scientific thinking, the more you can develop Innovation. 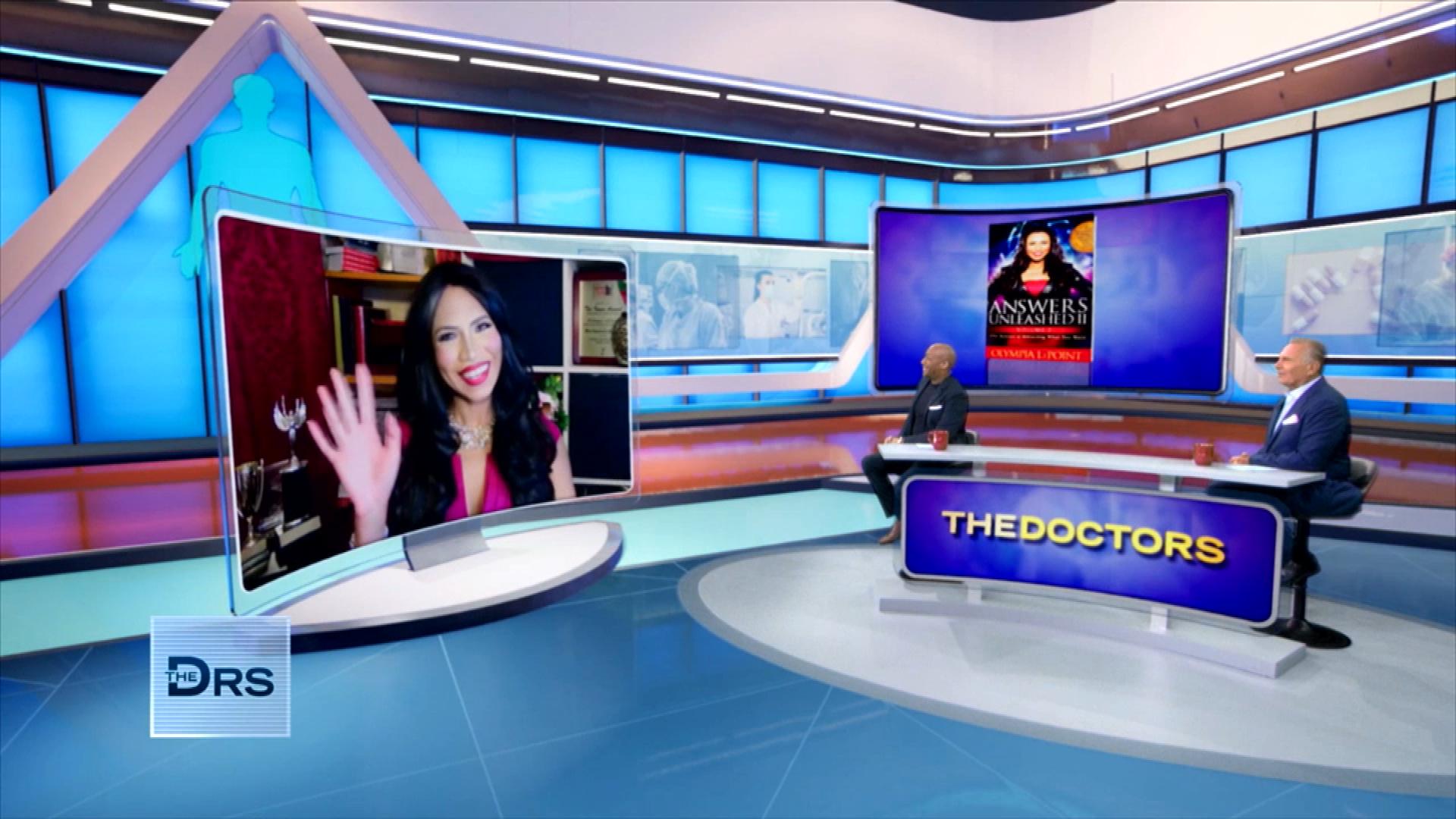 NEW YORK (CBS) – Olympia LePoint appears on The Doctors TV Show as a celebrity author of the Answers Unleashed® educational science book series, speaking about her latest book Answers Unleashed II: The Science of Attracting What You Want, and the new decision-making science method called, ‘Quantum Deciding’. Olympia LePoint is both a TV writer and talent for this CBS Television Distribution appearance. Air Date: October 21, 2021.

MIAMI (NBC6 News) – The NBC news segment was seen with high Nielsen TV ratings. Olympia LePoint speaks about her new book Answers Unleashed II: The Science of Attracting What You Want. She explains her background as being an award-winning rocket scientist and  promotes #WomeninSTEM by sharing her inspiring NASA experience. Olympia LePoint’s latest book explains science with brilliant stories, so you make effective decisions for the future you want. NBC6 News  Air Date: July 15, 2021.

On April 27, 2021, Olympia LePoint appears on Good Day LA Morning News to speak about her story and her latest book. The morning news show earned top ratings with viewers with over 125,000 people tuning into the show per Nielsen Ratings. Real life rocket scientist, Olympia LePoint explains the skills that she learned while launching NASA rockets that would inspire generations to come. She reveals her new book “Answers Unleashed II: The Science of Attracting What You Want.”

Olympia LePoint is featured as a “Modern Day Hidden Figure” and following the path of like the late NASA rocket scientist Katherine Johnson of the movie Hidden Figures.  And she shares her experience as a woman launching rockets, and breaking barriers.  Olympia LePoint is highlighted for her Answers Unleashed educational platform. Read the Full Article Here: https://people.com/human-interest/modern-day-hidden-figure-olympia-lepoint-shares-journey/

OLYMPIA LEPOINT SPEAKS ABOUT HER BOOK ON KATHERINE JONSON’S BIRTHDAY

LOS ANGELES (NBC News) – Olympia LePoint appears on Zerlina, NBC Peacock – MSNBC on August 26th, 2021 at 3pm. Olympia LePoint promotes her new book Answers Unleashed II, and she shares her personal story. The day is significant, as August 26th was the birthday of the late NASA mathematician and engineer, Katherine Johnson, who was featured in the blockbuster movie, Hidden Figures.

Olympia LePoint was invited to be LIVE ON AIR by Cheddar News producers as an award-winning rocket scientist and author, to speak about Jeff Bezos’ Blue Origin company launch today, August 26, 2021, as well as the NASA lunar landing missions scheduled with Elon Musks’ SpaceX company, as Blue Origin competes for the same contract.

LOS ANGELES (CBSLA News) – The CBS news segment was seen 8 times on TV and by 2,739,530 people per Nielsen TV ratings. Richard Branson on Sunday, July 11, 2021, became the first billionaire to rocket into space, and about 90 minutes later, returned to talk about it.  Olympia LePoint, Richard Branson, Elon Musk and Jeff Bezos all provide comments and excitement to this Space news and history. Watch the CBS News for the details

Richard Branson on Sunday, July 11, 2021, became the first billionaire to rocket into space, and about 90 minutes later, returned to talk about it. Award-winning rocket scientist and author Olympia LePoint watched the entire Unity.Virgin Galactic Launch, and provides commentary on KCAL and CBS News.  Olympia LePoint shares the significance of this history, and she shares how science solutions and innovation will be the result.

LIVE SPACE WALK. Olympia LePoint shares news about NASA naming its D.C Headquarters after the famous NASA mathematician Mary Jackson, who was the featured scientist of the blockbuster film “Hidden Figures.” Olympia LePoint also shares news about the first Space Walk with NASA SpaceX Crew Dragon 2 Mission, and she shares about her own person story of overcoming the odds to become a rocket scientist with video footage of a LIVE SPACE WALK! 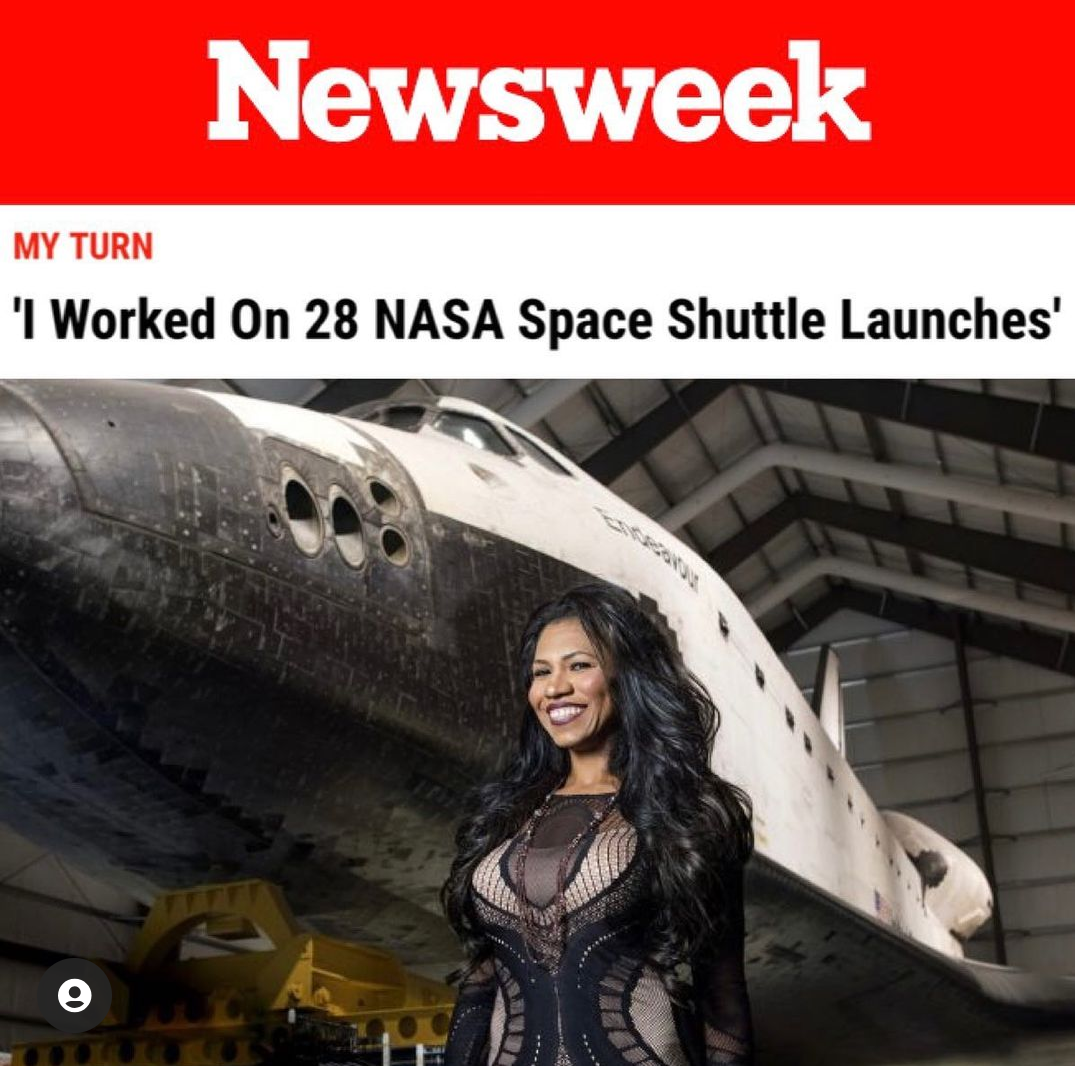 Olympia LePoint appears on the Tavis Smiley Radio show on KBLA Talk 1580 where she reveals her amazing story of how she transformed her mind into becoming an award-winning rocket scientist and author. The show aired June 28, 2021 to a Los Angeles audience estimated at more than 2 Million listeners. Overcoming the short-lived radio technical difficulties in the conversation at first, this journalist pair shares a powerful lesson that transforms listeners. Tavis Smiley goes into the mind of Olympia LePoint and uncovers a hidden story that will make you tune in.

Olympia LePoint has been dubbed “the Modern Day Hidden Figure” by People Magazine and hailed as the “New Einstein” by her fans! Kara on ABC Afternoon LIVE chatted with the author of “Answers Unleashed II: The Science of Attracting What You Want.” Olympia LePoint speaks about her story and her latest decision-making Science, with 6 Decisions that she calls, ‘Quantum Deciding.’

Seen by over 125,000 TV viewers, this segment is an entertaining TV clip that generated high TV Nielsen ratings! Real life rocket scientist, mathematician and TED talker Olympia LePoint has helped launch 28 space shuttle missions while working with NASA. The author’s newest book, “Answers Unleashed, Vol. 2: The Science of Attracting What You Want,” details her new scientific theory about human decision making.  LePoint explained the theory, working at NASA, helping people get past their “fear of math,” and all about her journey so far.

ON PODCAST WITH LOU PALUMBO

Lou Palumbo and Olympia discuss the significance of space exploration, the recent space tourism by Richard Branson and Jeff Bezos, her latest book Answers Unleashed II: The Science of Attracting What You Want, her new decision-making theory called Quantum Deciding, the adversities she’s overcome in her life to becoming the person she is today, her involvement in STEM and helping our future children, and if she has any interest in exploring space herself.

CBS News asks award-winning rocket scientist and author Olympia LePoint about the new space launches with Richard Branson and Jeff Bezos. On Good Morning Sacramento, Olympia LePoint discusses the Science in the Virgin Galactic space launch with Richard Branson, and Blue Origin launch with Jeff Bezos later this July 2021. There are risks in their flights. Listen and note the correction to be 40,000 feet. Their success or failure will chart the path for a new era of space travel.

ON CBS NEW YORK – WAKE UP WITH MARCI

Olympia LePoint Speaks About Her Story, NASA, and about Quantum Deciding

Olympia LePoint is featured on “Wake Up With Marci” Morning Show on WLNY CBS News – New York, August 28, 2021. Olympia LePoint speaks about her new Answers Unleashed II: The Science of Attracting What You Want. She explains that the Law of Attraction is truly a decision-making science called ‘Quantum Deciding.’

On April 27, 2021, Olympia LePoint appears on Sirius XM Radio Show ‘Signal Boost’  hosted by political commentators Zerlina Maxwell and Jess McIntosh. Olympia LePoint on Signal Boost empowered women to take their power to the next level with specific brain tips and new ways of thinking. Listen by clicking the link.

Olympia LePoint narrates her article on Thrive Global, where speaks of meeting Arianna Huffington, her ‘Quantum Deciding’ Method, and her new Answers Unleashed II book. The video is from the Thrive Global article, “Olympia LePoint: Meeting Arianna Huffington and Making New Decisions.” The article kicks off a new series of articles that explain the decision-making science called ‘Quantum Deciding’ that professionals can use in their career growth. See the original article on https://thriveglobal.com/stories/olympia-lepoint-meeting-arianna-huffington-and-making-new-decisions/

Author and Rocket Scientist, Olympia LePoint speaks about her book series on the AMAZON TV show “PROOF”, where she shares that human decision-making skills is more powerful than any force that can exist.

ON ADAM COROLLA’S PODCAST ONE

Adam Carolla interviews rocket scientist and self-help author, Olympia LePoint. She shares her upbringing near South Central Los Angeles, making it out of that world and pursuing her dreams of becoming a rocket scientist. Olympia also shares contents from her new book Answers Unleashed II and the Quantum Deciding science that she developed to explain how you make 6 decisions for the future you want.

On this episode of ‘We Need to Talk’​, Malynda Hale chats with Author and Scientist/Engineer Olympia LePoint. She gives advice on how to overcome challenges in society regarding racism and sexism.

Olympia LePoint explains on CBS News the reason why Crew Dragon Demo-2’s launch is named after the NASA Space Shuttle Endeavour vehicle. She reveals NASA astronauts Douglas Hurley and Robert Behnken joined the International Space Station crew, and they are performing tests on the Crew Dragon for human space flight. She also explains how people can watch Asteroid 2002 NN4 in the night sky as it can be seen near Earth”s neighborhood.

Rocket Scientist and Author Olympia LePoint comments on the NASA, SpaceX Crew Dragon Demo 2 launch with astronauts Bob Behnken, 48, and Doug Hurley, 52 as they arrive at the International Space Station in SpaceX’s Crew Dragon capsule. May 30, 2020.

Author and Rocket Scientist, Olympia LePoint speaks on KCAL and CBS News about the NASA SpaceX Crew-1 Dragon first launch from Florida’s Kennedy Space Center with four astronauts on board November 15, 2020. Olympia LePoint speaks of the innovative significance of this trip. She also explains Victor Glover’s monumental launch as a diversity goal met by NASA.

Author and Rocket Scientist, Olympia LePoint speaks on CBS News about the NASA SpaceX Crew-1 Dragon first launch from Florida’s Kennedy Space Center with four astronauts on board November 15, 2020. The spacecraft is expected to dock with the ISS around 11 pm ET November 16, 2020 after a 27-hour journey. NASA astronauts Michael Hopkins, Victor Glover, Shannon Walker, and Soichi Noguchi, an astronaut with Japan’s space agency were on board. 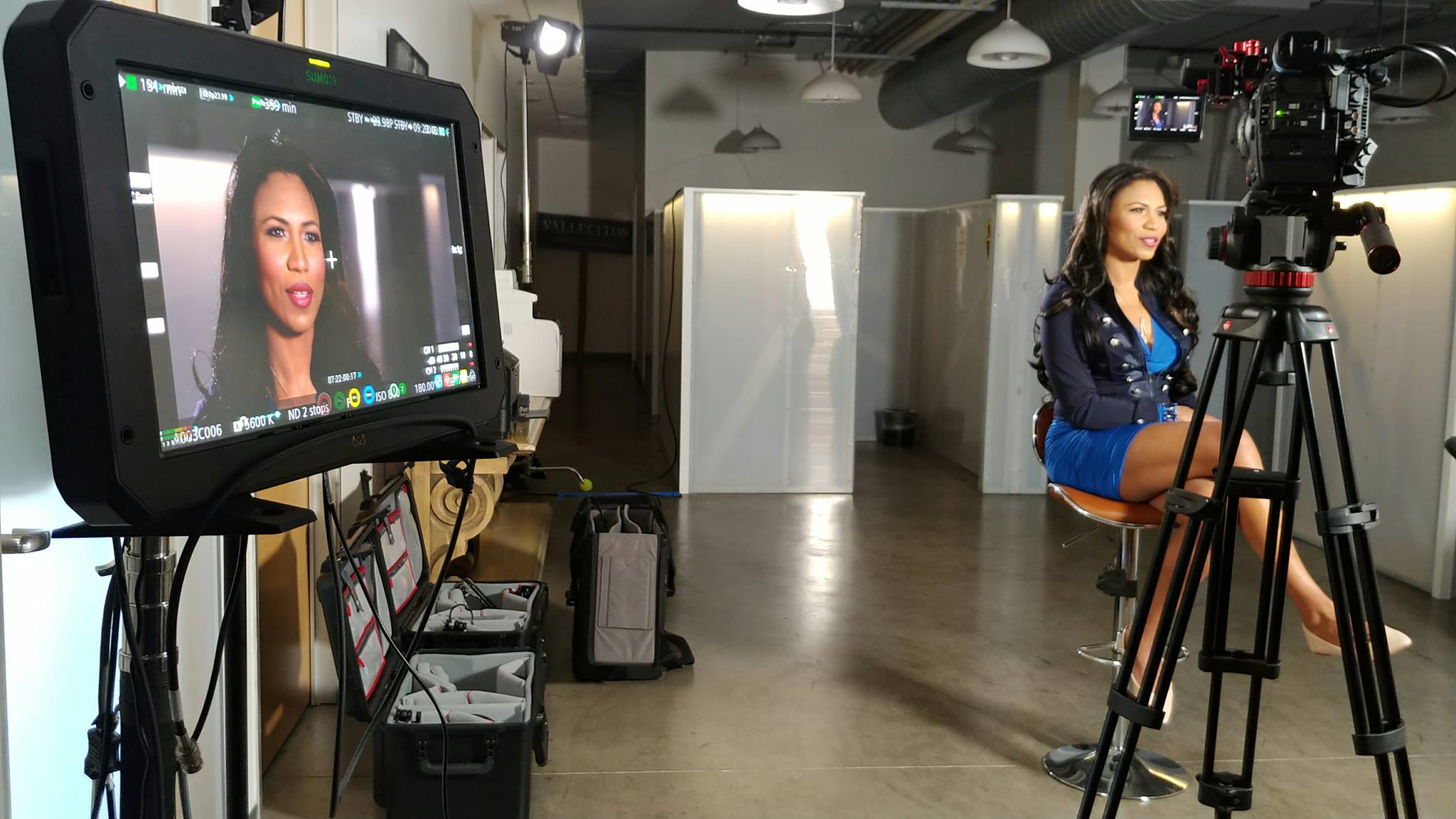 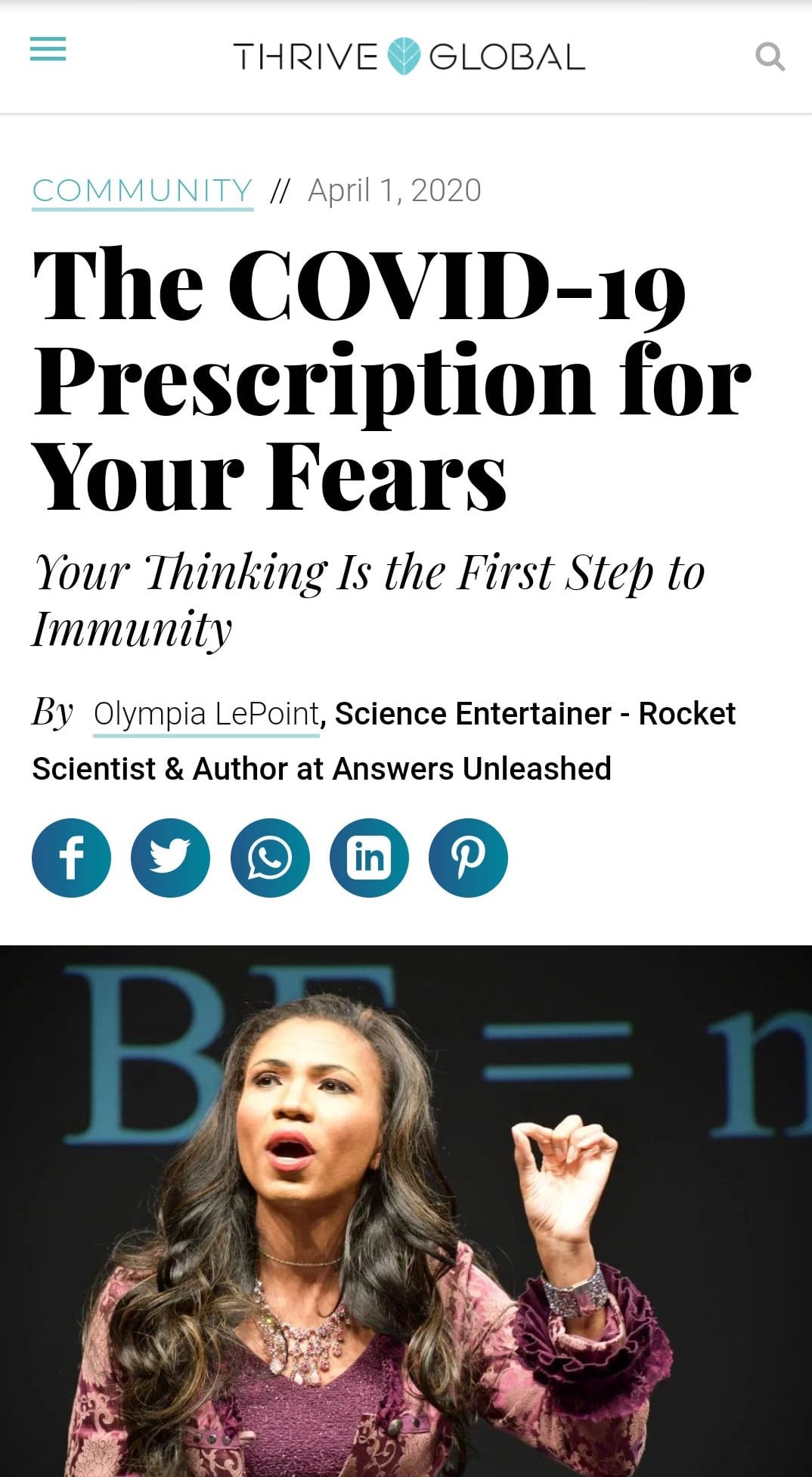 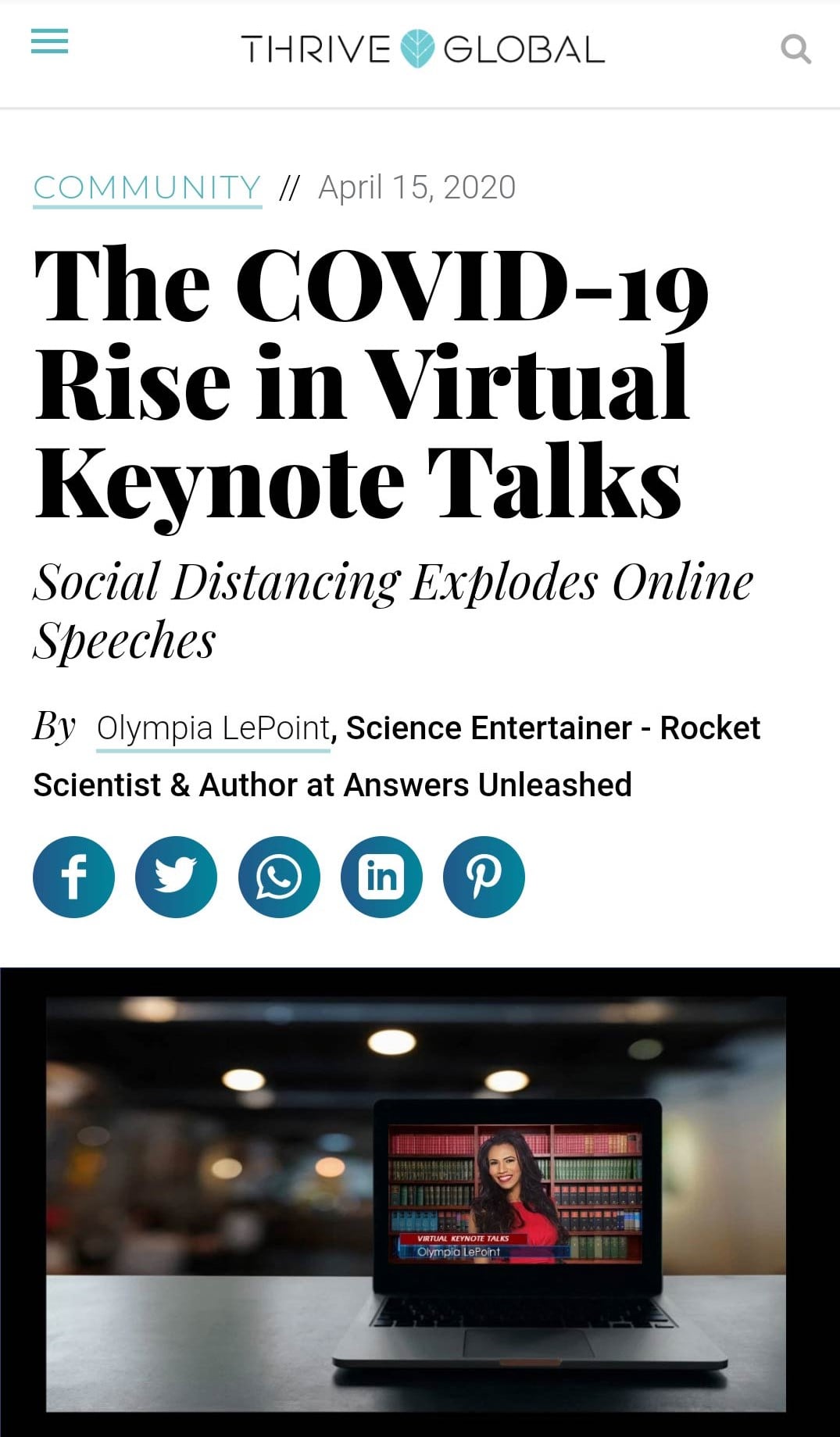 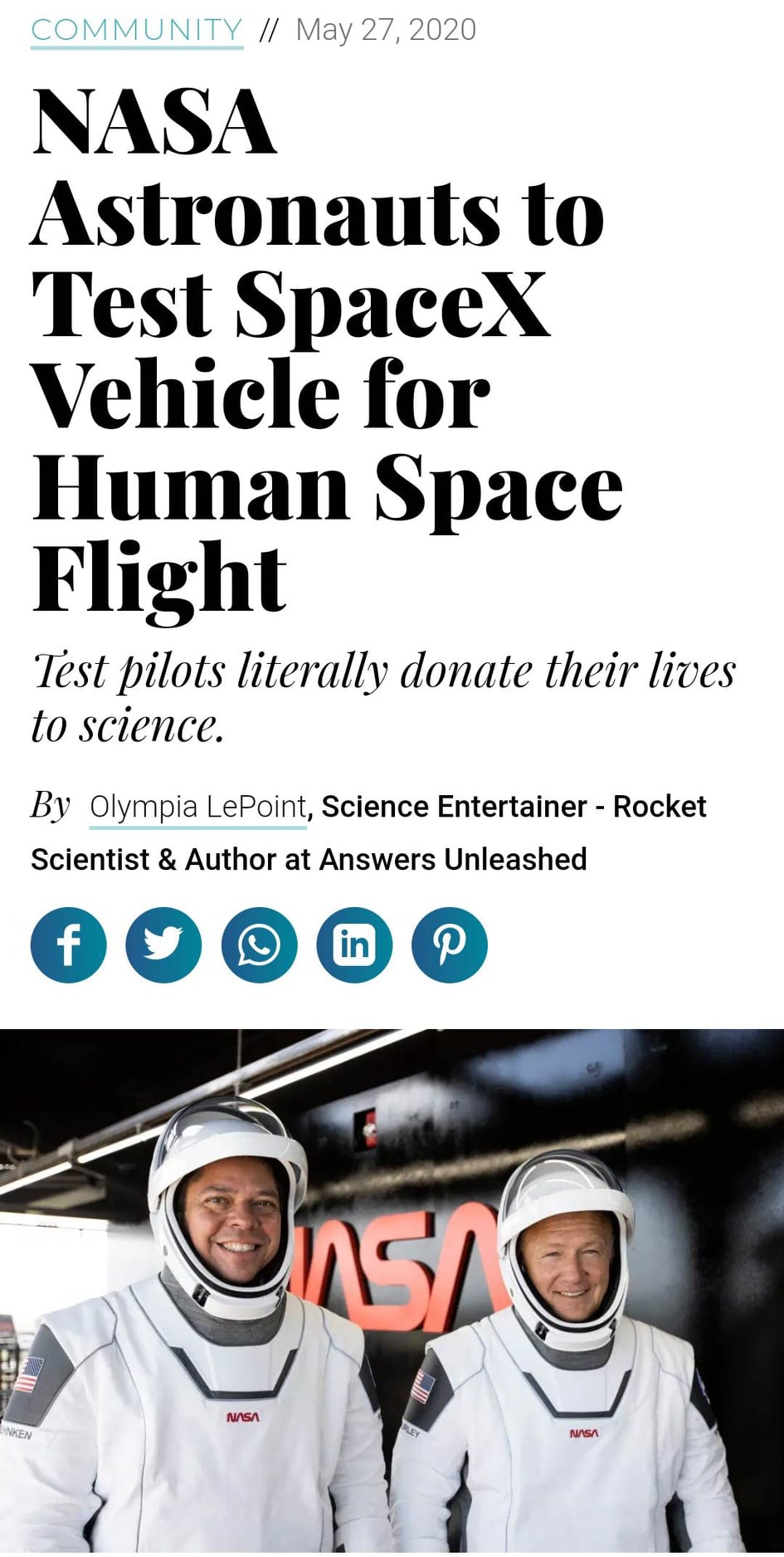 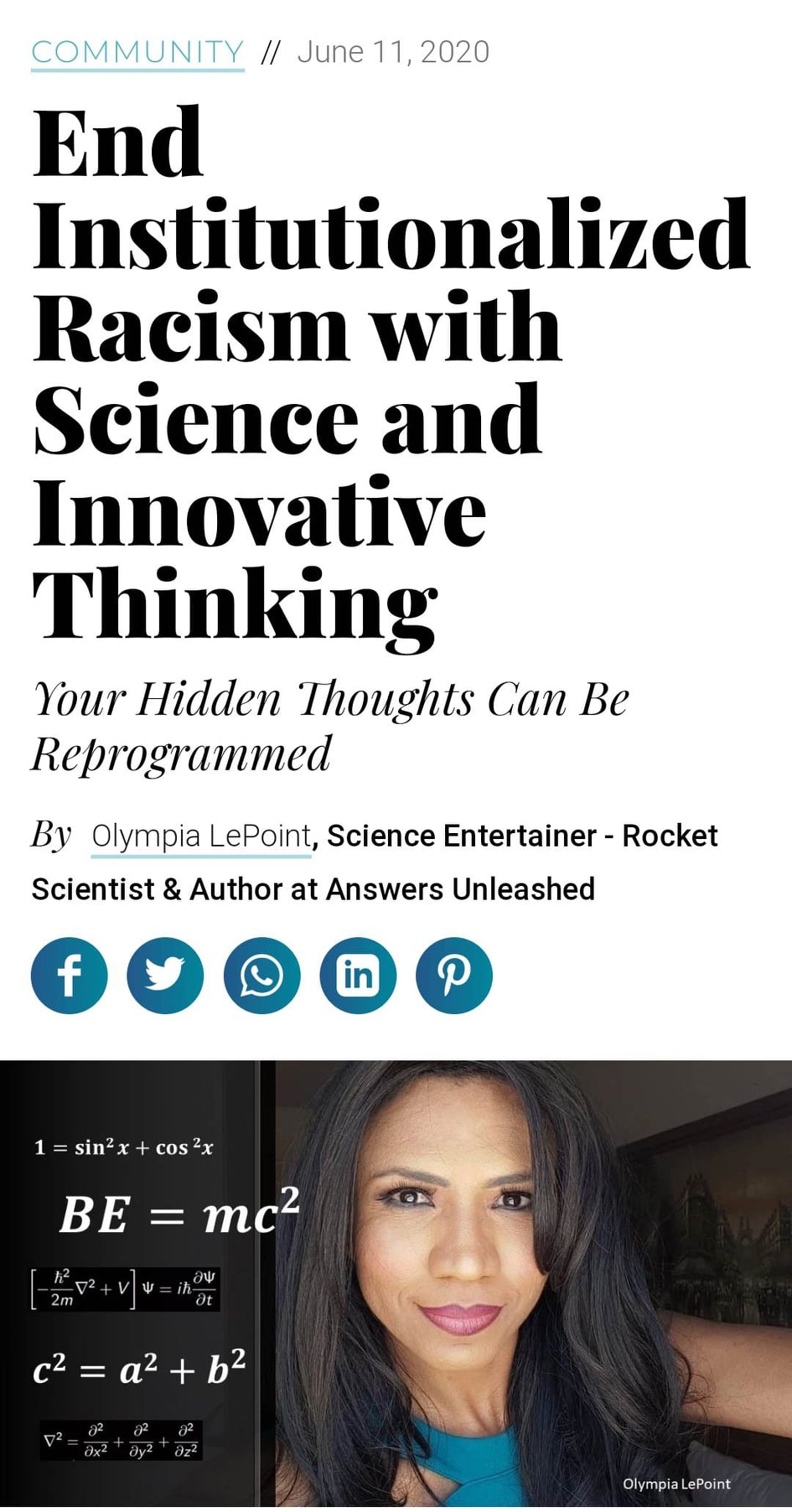 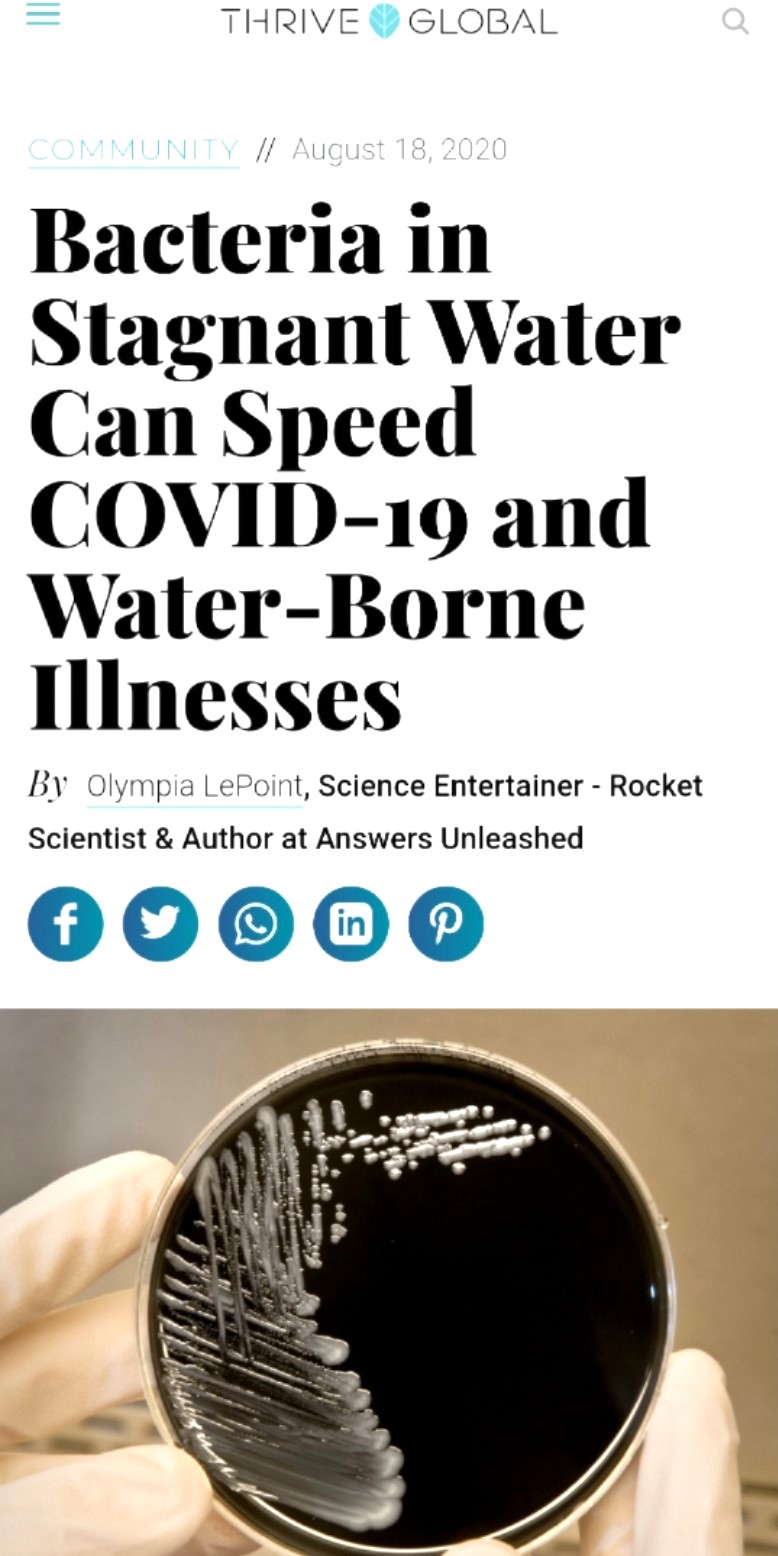 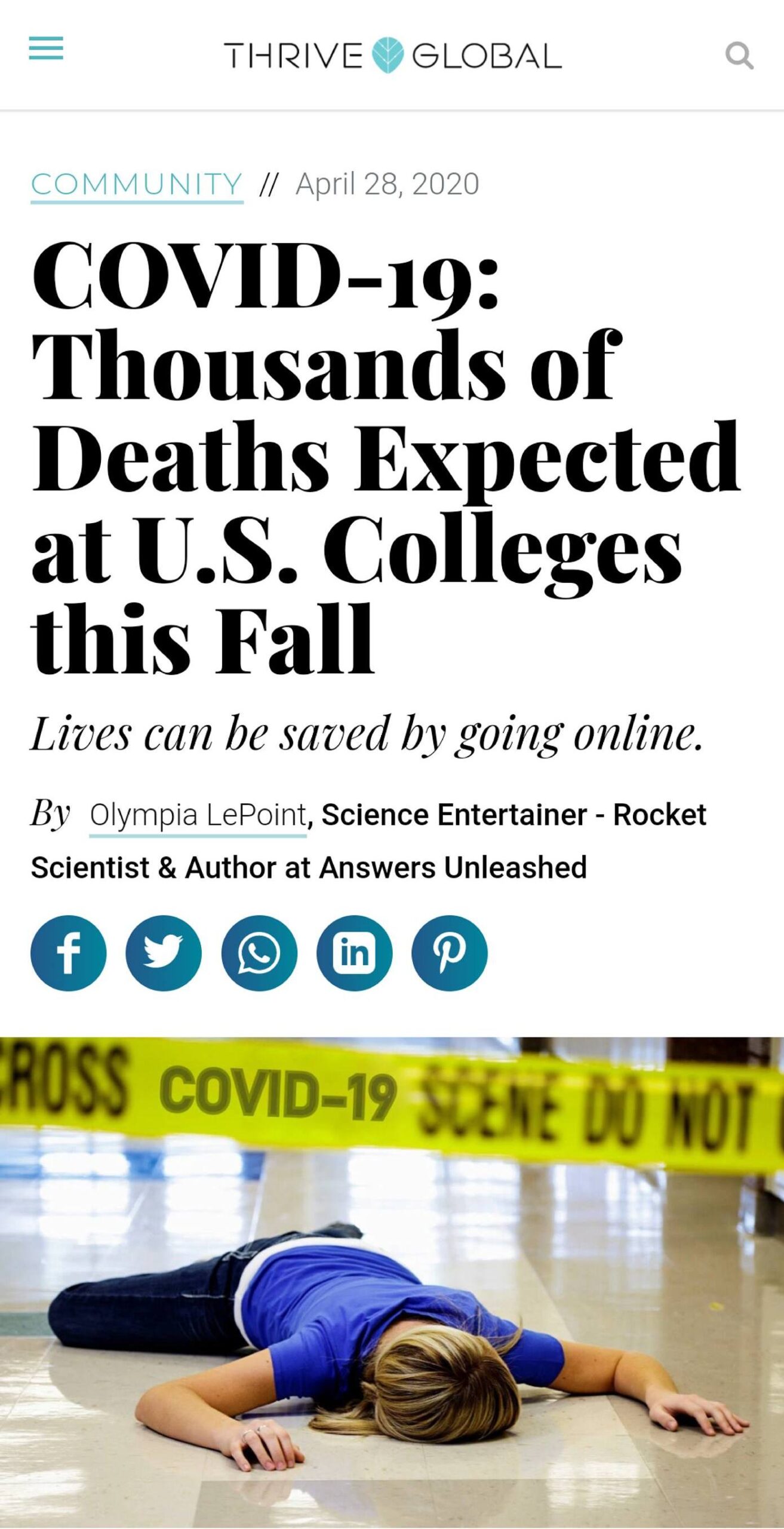 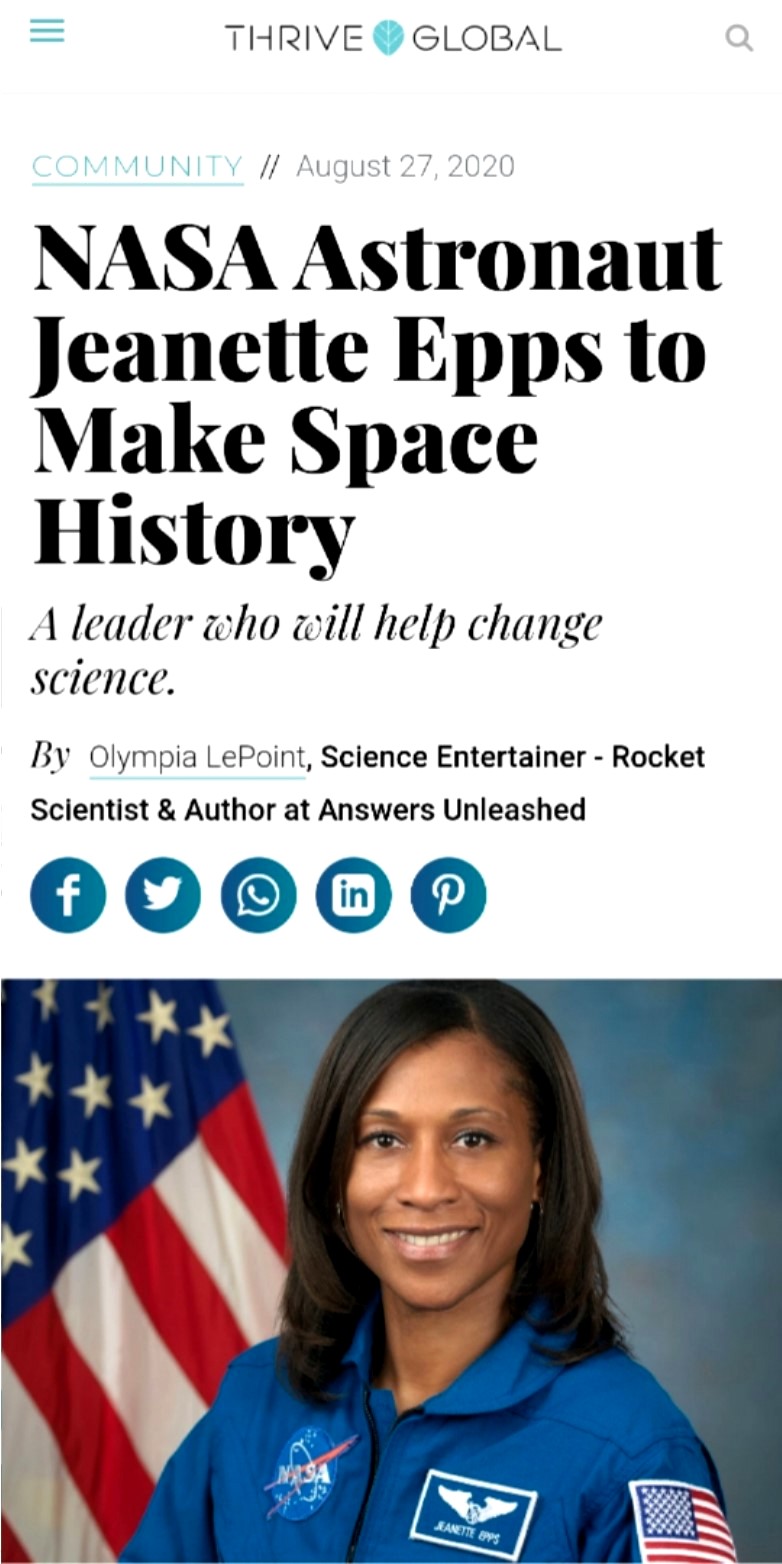